(Minghui.org) Today’s news from China includes incidents of persecution that took place in 12 cities or counties in 7 provinces, where at least 32 practitioners were recently persecuted for their belief. Three of these practitioners whereabouts are unknown. 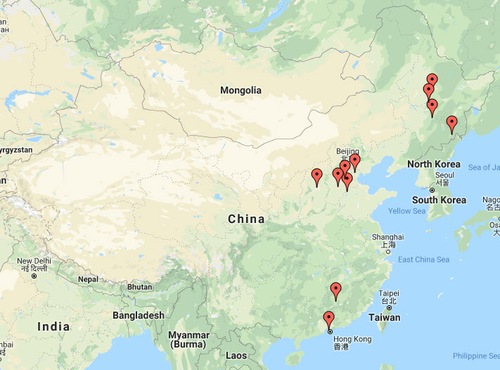 Mr. Wu Rui, Ms. Li Ruihua, and Mr. Xie Wanmeng were arrested in late May 2019. Their cases have been filed with the Procuratorate.

Ms. Han Xuejiao was stopped at the checkpoint in Shenzhen Airport on the morning of September 14. Her whereabouts are unknown.

Ms. Peng Yunzhou from Lanxi County was stopped at the Wapenyao checkpoint in the Harbin Road section, on the morning of September 15, 2019, when she was on her way to Shuangcheng City. She was taken back to Lanxi County by the Yulin Town police. Her whereabouts are unknown.

Ms. Chen Wenjing, 70, from Daying Village, Wangkou Town, was arrested by plainclothes officers from the Datun Police Station on August 29, 2019, for distributing Falun Dafa materials at the Datun Town Farmers’ Market. Her home was repeatedly ransacked.

Ms. Chen has been taken to the Hengshui City Detention Center.

Ms. Xie Guangxiu was arrested by officers from the Shuixi Town Police Station on the morning of September 10, 2019, for distributing information about Falun Dafa. The officers ransacked her home, and confiscated a copy of Zhuan Falun and photos of the founder of Falun Dafa. She is being held in a detention center.

Mr. Zhao Jinzhong was arrested and his home was ransacked on September 7, 2019. His whereabouts are unknown.

Ms. Wang Shuying was arrested after work, in the hallway outside her home, by officers from the Decheng District Domestic Security Division on the afternoon of August 8, 2019. Her home was ransacked.

Ms. Wang was taken to a detention center, where they tried to make her recite the center’s regulations. When she did not cooperate, the guards insulted her and rationed her meals. She returned home on the afternoon on September 7.

Ms. Xu Guilan and Ms. Tian Meiying from the Huabei Oilfield are being held in the Hejian City Detention Center of Cangzhou City.

Ms. Zhang Wenci, in her 70s, from the Hongqiao District, was arrested by Domestic Security officers on the evening of September 10, 2019. Her Falun Dafa books and materials were confiscated. She is being held in the Hongqiao Detention Center.

Ms. Ji Chunmei was arrested on October 16, 2018. She was secretly sentenced to an eight-year prison term, and recently taken to the Xinxiang Women’s Prison. Her family was not notified throughout the entire process.