(Minghui.org) Today’s news from China includes incidents of persecution that took place in 13 cities or counties in 7provinces，where at least 21 practitioners were recently persecuted for their belief. 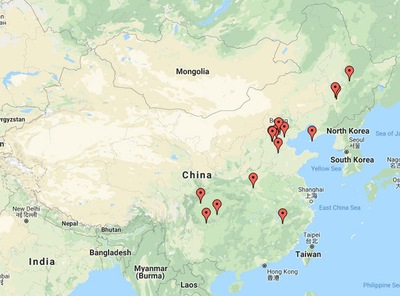 Mr. Geng Decheng was sentenced to three years in prison and is being held at the Zhuhu Farm. His wife learned the news in September, 2019.

Ms. Cao of Nanyang Oil Field is in her 60s. She and her daughter Fangfang were arrested at home on the morning of August 30, 2019. Fangfang was released that night. Ms. Cao was taken to a detention center.

Ms. Zhang, in her 60s, was arrested at home on the same day. Ms. Zhang lives in family compound of the Nanyang City Ninth Middle School.

Mr. Du Jingyi is being held at the Changchun City No.2 Detention Center.

Officers from the Fuchang Township Police Station ransacked Ms. Jiang Rongting’s home in Xiaojidian Village on September 5, 2019. They confiscated printers, Falun Gong books, a picture of Falun Gong’s founder, items with Falun Gong messages, and other items. Ms. Jiang was so frightened that she collapsed and her blood pressure rose to 170 mg/dL. She was taken to emergency and discharged after mid-night.

The officers threatened to detain Ms. Jiang for 15 days. After they extorted 10,000 yuan from her daughter, they issued a document of release on bail due to her poor health.

Ms. Liu Jungai was arrested on September 16, 2019 for talking to people about the persecution of Falun Gong. Her home was ransacked.

Ms. Zhang Ping was arrested at home several days ago by officers from the Xigao Police Station. She hasn’t been released yet.

Mr. Tang Zhikai, 69, was followed and arrested at his home in Chongqing by Dazhu County auxiliary police, who were under the command of the Dazhu County Domestic Security Division and the 610 Office, on the morning of August 28, 2019. The police ransacked the place, and confiscated cash, printers, players, and other items. They learned that Mr. Tang owned two more properties and ransacked those places, too. Mr. Tang is being held at the Dazhu Detention Center.

Ms. Zhang Yuling, her husband, and their child went to visit her mother and sister in Ningyuan Town on September 12, 2019. Ms. Zheng was arrested the next day and taken to Jilin Province. Police may track her through her cell phone.

Ms. Liu Bohui, Mr. Tian Junjie, and Ms. Liu Yanmin, from Xiong County were arrested by officers from the Chaheji Police Station on July 17, 2019. Someone reported them when they talked to people about the persecution of Falun Gong in Chaheji, Ba County. They are being held at the Ba County Police Department.

Ms. Zhao Shirong and her husband of Xingwen County were arrested by agents from the Xingwen County 610 Office and officers from the Xingwen Domestic Security Division on September 8, 2019. The officers took Ms. Zhao to Ms. Liu Guanglian’s home, ransacked the place, and confiscated Falun Gong books and other items. They then arrested Ms. Zhao’s daughter. Ms. Zhao’s husband and daughter were released. Ms. Zhao was taken to Gao County.

Ms. Xu Liming, her husband, and Ms. Pan Xiaohong, from the Dalian Development District were arrested on the morning of September 17, 2019.

12. [Beijing] Additional News on the Arrest of Ms. Wang Bozhi and Others

Ms. Xiao Xiaoling, Ms. Yu Yongrong, and Ms. Wang Bozhi were arrested by agents from the district government and town Comprehensive Management Office, as well as officers from the Qiaozi Police Station on the afternoon of September 6, 2019. Their homes were ransacked. Ms. Wang and Ms. Yu were held at the Huairou Detention Center. Ms. Xiao was held at the Shunyi Detention Center. Ms. Wang went on a hunger strike to protest her arrest. She failed the physical exam and was released on bail.

Ms. Gao Jinhua from Quanfang Village, Laiyuan Town was arrested at home by five officers from the Laiyuan County Domestic Security Division on the morning of September 17, 2019. The officers ransacked her home and confiscated her Falun Gong books, printouts, and other items. Ms. Gao is being held at a detention center and subjected to two weeks of detention.

Mr. Chen Minghua, an engineer at a rubber company in Hengshui City, was arrested by officers from the Suzheng Police Station on the morning of September 12, 2019, when he brought Falun Gong printouts to the police station. Zhang Haizhao, head of the Development District and the director of the Suzheng Police Station led six officers. They ransacked Mr. Chen’s home, confiscated his printers, computers, and other items. Mr. Chen is being held at the Hengshui City Detention Center.

Ms. Sun Yanxia, who was being held at the Siping City Detention Center, was in critical condition as a result of persecution on August 15, 2019. The Lishu County Domestic Security Division notified Ms. Sun’s family to apply for release on bail.